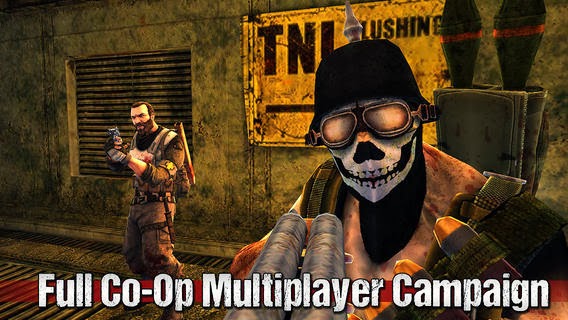 Instructions:
1 - Open app and allow to fully load then close from multitask bar
2 - Download file and using ifile/ifunbox place file in
var/mobile/applications/2013:/IW/documents
3 - Have fun and enjoy

Originally $6.99! Are you ready to experience the most challenging action horror shooter in the App Store? Features the first ever full multiplayer co-op campaign for the iPad, iPhone, and iPod touch. Fight zombies and epic bosses with your friends through post-apocalyptic environments.

Are you ready to experience the most challenging action horror shooter in the App Store? Features the first ever full multiplayer co-op campaign for the iPad, iPhone, and iPod touch. Fight zombies and epic bosses with your friends through post-apocalyptic environments.

The year is 2013 and the world as we know it has come to an end. Society has completely broken down. The Scourge as it has become known is an engineered virus stolen and then released upon the world by Al-Qaeda. It was intended to send the West back to the Stone Age by turning their citizens into crazed mutated beasts. In this power, vacuum Al-Qaeda planned to create a new world order.

The infected roam the world and outnumber the few left alive. Pockets of civilization hole up around the planet trying to survive and weather the storm. Courageous and highly-trained groups of mercenaries explore the deadly ruins of civilization to salvage critical supplies and provide defense for these settlements.

Their future is in your hands, Mercenary.

One of the greatest features included in 2013: Infected Wars is the option to play with your friends throughout the entire co-op campaign - something never before seen in the App Store. Every part of the game is designed to be played in both single player and co-op. As you progress deeper into the red zones missions become increasingly challenging, requiring wits and tactical skill to survive!

◆ Feel the intensity of being swarmed by hordes of infected zombies and mutants with console quality graphics.
◆ Disturbing sound and voice acting bring the post-apocalyptic world to life.
◆ Developed using Epic’s cutting-edge Unreal Engine 3 for mobile devices.
◆ Real world physics and ragdoll effects let you see your enemies fly like never before.

◆ Marine – well rounded and an expert in automatic rifles.
◆ Field Support – likes to get up close and personal specializing in shotguns and pistols.
◆ Sniper – specializing in a support role for their partners the sniper will pick off their targets at range.
◆ Sapper – excels at taking out bosses and groups of enemies very quickly with explosive weapons.

From close range sawed off shotguns, .50 caliber pistols, grenade launchers, assault rifles, and rocket launchers to everything in between. Only a real marksman will master them all and be a top shot.

◆ Face off against larger than life bosses that can smash the inexperienced player to bits.
◆ Not just zombies – multiple enemy types introduced throughout gameplay.
◆ You must use strategy, tactics, and teamwork to defeat these foes.

We are an indie developer and need community support. Interact with us today!

DISCLAIMER:
iPod touch (4th generation) does not allow for multiplayer and does not include the Hardwell Park map due to the devices technical limitations. While it is still a ton of fun to play please install knowing these limitations.

◆ Enhanced graphical effect for high end devices.
◆ Added FOUR difficulty levels.
◆ Some of these difficulties have mid-level checkpoints where you restart at if you should die.
◆ Added an ironman mode. Earn gold for completing the single player campaign in a single life.
◆ Earn bonus cash, gold, and more by finding salvage hidden in levels.
◆ Ammo pickups now apply to all weapons.
◆ Bug fixes.

◆ Fixed a bug where the difficulty could be set to veteran between missions.
◆ Fixed bug preventing mission 8 (Hardwell Park) from being completed.